This is about an Artist, Photographer, Mother and Teacher.

Joan Dorothy Bancroft was a talented artist and one of the original members of the O’Hanlon Sight & Insight Art Center in Mill Valley.  She was active with the Mill Valley community in the 1960s and early 1970s, ranging from being a Girl Scout leader to working at the Family Service League Store, as well as participating in the Homestead Valley Community Garden Co-op and the Stolte Grove Bach-to-Mozart Festivals.  Joan became interested in Buddhism and spent a great deal of time at the Green Gulch Zen Center.

In the 1970s things started to change.  There were episodes of intense anger and intense paranoia.  It was scary to be around her.  Joan was diagnosed as “psychotic” and she became a different person.  She drifted away from her friends and family – she did not know her children.

We were told that our mother was “psychotic” and we should stay away from her because she would frighten us.  What we didn’t know until just recently was that her diagnosis was schizophrenia.

She never knew she had a mental illness and refused all medications because she believed she was perfectly fine.

For the next 40 years her constant companions were cameras, pens, and notepads. Joan left behind hundreds of handwritten notes, lists, poems, and musings along with thousands of photographs, collages and sketches.  These ephemera contain layers and clues about her life which profoundly document the world as she knew it.  There are messages for and about our world through the mind of a different type of consciousness.

This person was my mother, psychotic or not, and after almost 40 years she became my teacher.  Even though she did not recognize me as a family member, she started to believe that I was one of her “many pupils from around the world.”  I was finally recognized by her, but in a totally different way.  She told me about her daughters who had been taken away by “them” and replaced by robots.  Later she told me her daughters had been killed by the dangerous fish.

For three weeks I was able to hear her stories and learn the meaning of some of her collages.  I was amused and honored to be designated her “financial adviser” even though she had no finances, she believed that “they” had stolen her pension and retirement funds.  And, I was able to bring her some items that she really wanted including a “cheap watch that would last at least a year,” peach yogurt and “Virgin Mary Olive Oil.”   It was a shock when she passed away so quickly because I was hoping to have several months to be with her and experience her reality.  One cannot make up for 40 years in three weeks nor can one even began to grasp anything about the realm of schizophrenia in that short period of time – unless of course you have schizophrenia.

With this site, I am sharing my mother’s story and the world she lived in.  This is a world that we may not understand but – through my mother’s writings, photographs, collages, sketches and fashion – can provide insight into “our world” and the people who inhabit and bridge both of these worlds.

Joan Dorothy Bancroft, my mother, passed away peacefully on April 15, 2014 at the age of 84.   She was a native of Providence, Rhode Island and had been a resident of Marin County for the past 55 years. 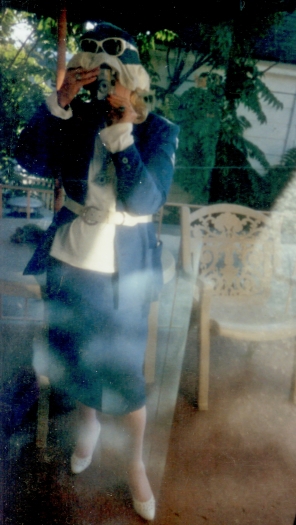