I am not sure when my mother first became interested in photography.  I recall my father having one of those classic old film cameras in a leather case which was placed carefully out of reach of small curious hands. This fine instrument was used infrequently on special occasions.  Later, there was a Kodak Instamatic which was used regularly by my mother.  She was almost always the one behind the camera so she rarely appeared in any photographs.  It is interesting to see now the numerous “selfies” she posed for.

There is only one photograph remaining of the numerous snapshots my mother took back in the 1960s and 1970s.  During those years my mother was a bit different than other mothers, and looking back there were certainly some very bizarre occurrences, however at the time it seemed to me to be “normal behavior” for a mother.

After my mother became immersed in her altered reality, in other words a permanent state of psychosis, she became many different people.  I am not necessarily referring to multiple personalities, although as I read through her writings I am beginning to wonder if indeed she did have more than one personality.  My mother became in her reality a lawyer, judge, teacher, architect, and most tangibly a writer and photographer.  When going through her minimal belongings, I kept finding undeveloped film rolls and disposable 35mm cameras.

I actually may have thrown one or more of the cameras away when I first started going through her things.  Then I opened a plastic expandable file filled with photographs, and I started looking… 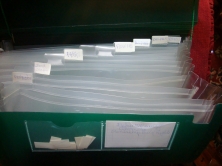 In addition there was this amazing Kodak Master Photoguide. 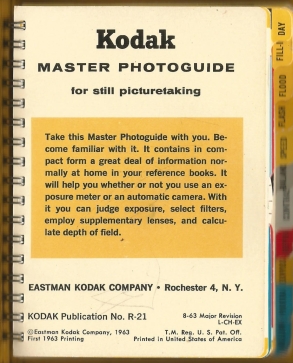 I Some of her photos are poignant, some astonishing and beautiful, as well as mysteriously bizarre.  Over the last several months I have continued to go through her file folders, photo albums, and packets of prints, all of which were dated from 1996 to 2013.  Needless to say, the rest is “herstory” with this website and trying to piece together the stories hidden in these photographs.

In addition to the photographs there are an overwhelming amount of lists and notes about everything from architecture to law, motherhood to  walruses (another dangerous aquatic animal), babies to photography, and more…

I will continue to post my mother’s notes and quotes on the art of photography, and life, as frequently as possible–as well as her photographs.